STAY TUNED FOR DETAILS OF OUR NEXT OSO Conference Gold Coast 2023.

The effect of orthokeratology on axial length elongation in children with myopia: Contralateral comparison study

The effect of orthokeratology on axial length elongation in children with myopia: Contralateral comparison study

PURPOSE: To evaluate the effectiveness of the orthokeratology (OK) lens slowing myopic progression compared with no intervention in pediatric eyes METHODS: A retrospective review of medical records was performed on 45 monocular myopic subjects 7 to 13 years of age who were treated with monocular ortho-k lens and followed-up for more than 12 months. The monocular myopia in the subjects’ eyes was -0.75 to -4.25 D (diopter), and near emmetropia in the contralateral and with-the-rule astigmatism no greater than -1.50 D. Axial elongationOU, reflecting the progression of myopia was measured at baseline using the same AL-Scan Optical Biometer and compared between the two eyes of each individual every six months for one year in all subjects and for two years in 9 subjects. 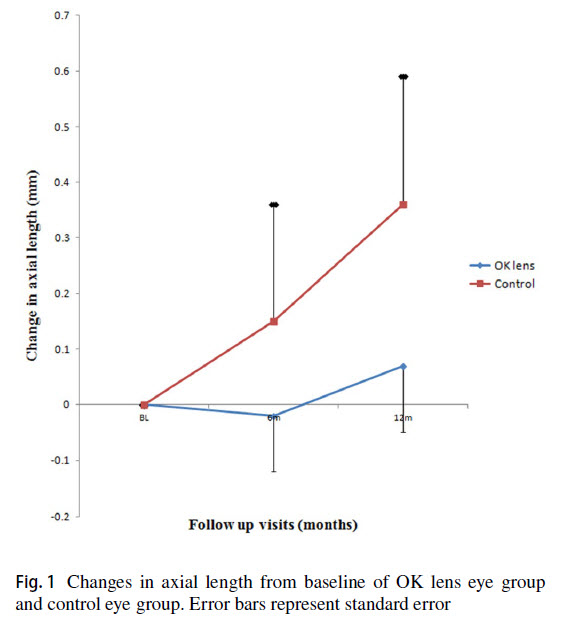 CONCLUSIONS: Using a contralateral eye study design, which prevented the influence of potential confounding factors, Effectiveness of the OK lens was proved. Myopic progression within a subject was excellent compared with no intervention.

OSO Comment: This retrospective analysis of orthokeratology wear in monocular myopes is rather unique – there is only a handful of other reports (eg Cheung et al 2004, Asymmetrical increase in axial length in the two eyes of a monocular orthokeratology patient.) that have a control for the ortho-k eye being the patient’s other uncorrected eye. This means the experiment’s eyes are controlled for environmental and genetic factors, something difficult to achieve in other studies.

This study suggests an excellent axial length control effect with ortho-k over a 12-24 month period. We are busy trying to determine which is the optimal myopia control strategy to minimise axial growth. With recent reports (Bullimore et al 2018. Low-Dose Atropine for Myopia Control: Considering All the Data. JAMA Ophthalmol) suggesting that 0.01% atropine may not be as useful to restrict axial growth as it was initially thought, this lends weight to orthokeratology being a number one option for axial length control.

Of course one must also consider the mechanism of eye growth in a monocular myope may be different to the bilateral myopes that we see most often as myopia control practioners.